Information, tips and etiquette on board 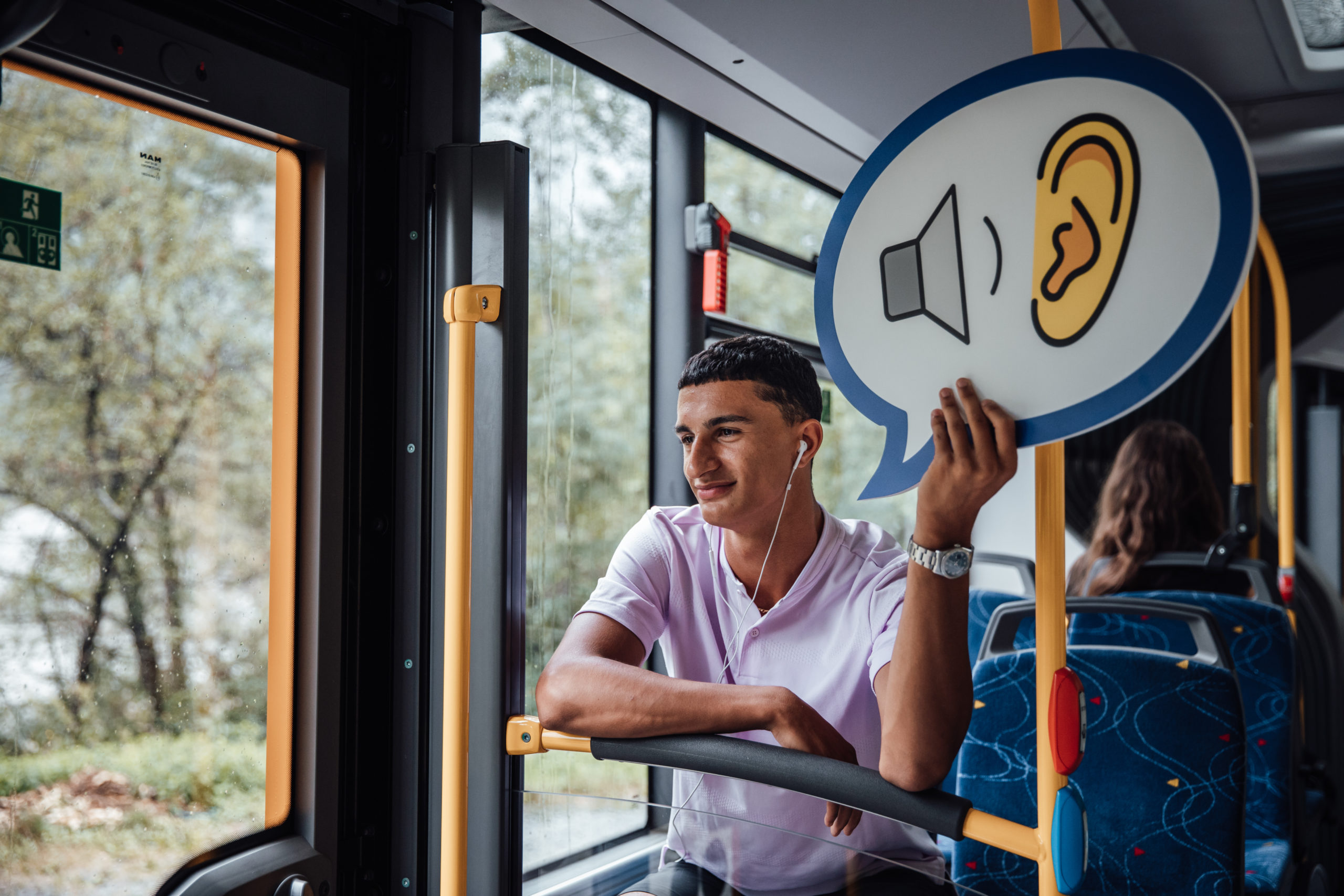 The first draw of the FARTeducando campaign competition has taken place… but don’t despair; the competition continues until 31 January 2023!

To win an Arcobaleno annual season ticket (3 zones, 2nd class) the rules remain the same: find, photograph and upload images of the little clouds on board the FART buses and in the Locarno-Muralto station area on www.fartiamo.ch/farteducando-concorso by Tuesday 31 January 2023. GOOD LUCK!

The campaign
FART SA is launching an awareness-raising campaign with the aim of providing useful information and advice to its users with an exceptional testimonial: the newly crowned European 400-metre vice-champion Ricky Petrucciani.

A winner on the track, an example outside the stadium. Ricky Petrucciani, FART’s testimonial from January 2022, is the face of FART’s new awareness campaign, which aims to provide its users with useful and important information to ensure that they (and other passengers) have a punctual, comfortable and safe journey.

In fact, the campaign proposes 13 points that include on-board behaviour, safety measures and useful advice with a common denominator: the face of Ricky Petrucciani, who has just returned from the European Championships in Munich with a splendid silver medal won in the 400 metres. Clouds in hand, Ricky presents the various points to respect when travelling, such as avoiding putting your feet on the seats, waiting for the bus at the correct distance or keeping your electronic device at a low volume to respect the other passengers on board.

The FARTeducando campaign is supported by a number of communication channels, with the aim of reaching all users. Practical leaflets with all the information will be available on the buses. On the www.fartiamo.ch/farteducando website, on the other hand, the various rules and tips will be available in digital format, which will be shared on FART’s LinkedIn and Twitter profiles.

An annual Arcobaleno season ticket for 3 zones, 2nd class. Existing season ticket holders will receive a voucher to be used to renew their season ticket. The prize is not convertible into cash

1 Everything in its place 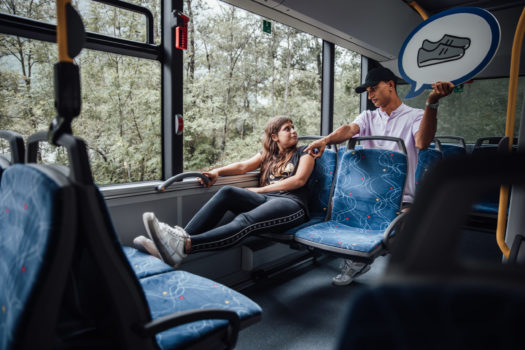 We do our best to ensure a comfortable journey for our passengers. By avoiding placing your feet on the seat or occupying seats with personal belongings, travelling comfort is enhanced for everyone. 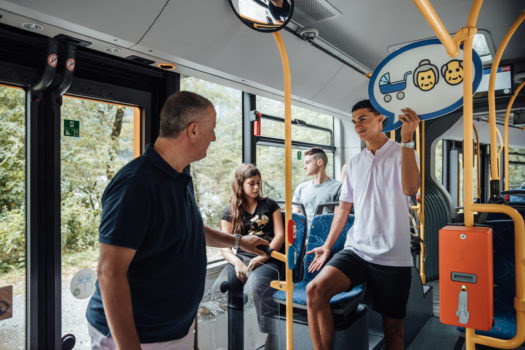 During rush hours it can be difficult to find a seat. Some users may have difficulty standing or reaching a free seat away from the door. Standing up, giving up your seat, is a gesture of great kindness and responsibility. 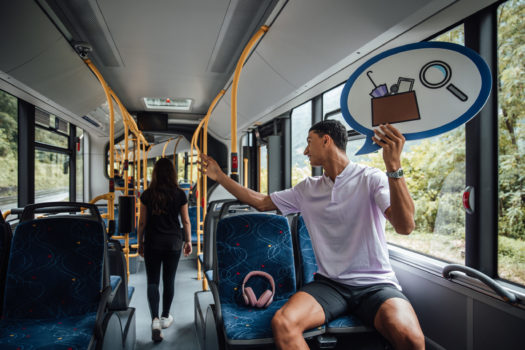 4 Do not talk to the driver 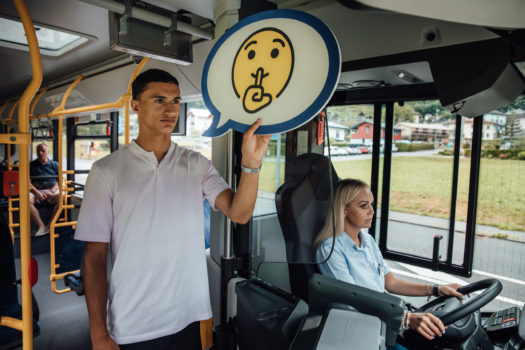 While driving, the driver must ensure safety, punctuality and a comfortable ride. The Arcobaleno App offers real-time timetables, information on disruptions and connections. 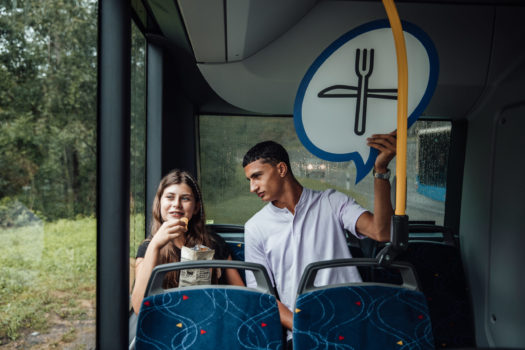 Thirty-five hours are invested every day in cleaning our vehicles. Avoiding eating on board and disposing of bottles and leftovers in a sustainable way helps to keep the vehicle clean while travelling.

6 Watch out for the scooter 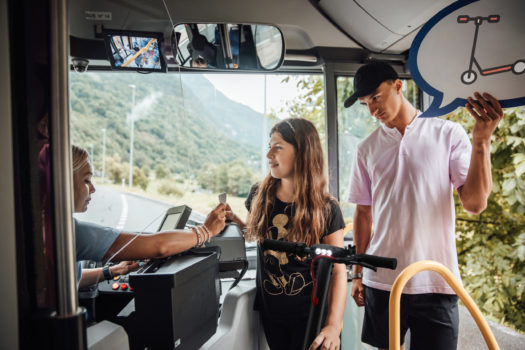 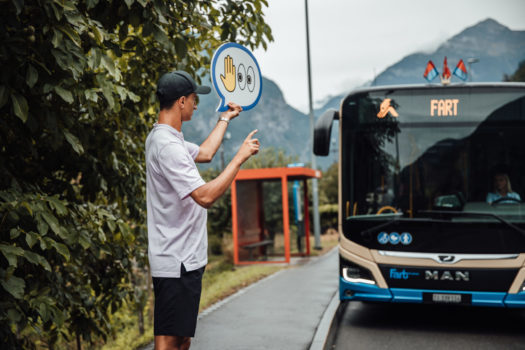 Lots of people waiting at a stop, an absorbed driver reading the newspaper or looking at his phone. These are some of the situations that can mislead the driver. Maintaining eye contact is important to signal the desire to board the oncoming bus. 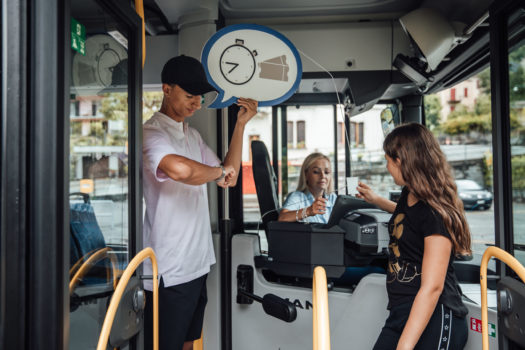 There are 960 minutes invested every day to sell tickets on board. Minutes that can cause delays. How can this be avoided? By buying your ticket in advance at the ticket machine or on the Arcobaleno App or by purchasing multi-ride or multi-day cards (6 trips for the price of 5). 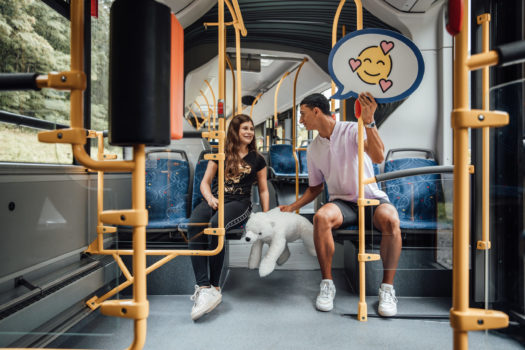 However small, no act of kindness is wasted (quoted in Aesop). A smile, a kind word, a hand outstretched to help a person in need. This too makes the journey a better experience. 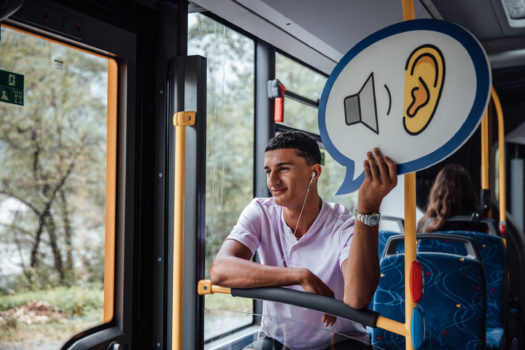 Listening to music while travelling can be relaxing... but it can also be annoying. Wearing earphones, maintaining an appropriate volume and speaking in a moderate tone makes the journey more pleasant for everyone. 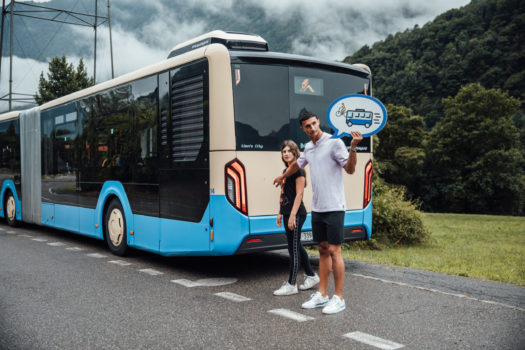 The journey is over, it is time to disembark and reach the final destination. Better not to be in too much of a hurry. The bus can obstruct the view of oncoming drivers and cyclists. Before resuming the journey, it is important to check that the road is clear on all sides.

12 Distant at the right point

The bus is coming and the urge to get on board is great? Safety remains paramount, however. At the bus stop it is important to keep a distance of at least 50 cm from the arriving bus and only approach it when the vehicle has finished its journey and is ready for passengers to board and alight.

13 We are not looking for equilibrists 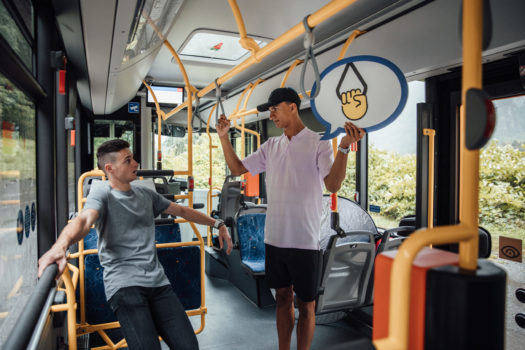 It may happen that you have to travel standing up during rush hour or simply because of a personal choice. On any journey, even a short one, it is important to ensure that you are firmly anchored to a support (handle, vertical or horizontal pole).

This website uses cookies to improve your experience while you navigate through the website. Out of these, the cookies that are categorized as necessary are stored on your browser as they are essential for the working of basic functionalities of the website. We also use third-party cookies that help us analyze and understand how you use this website. These cookies will be stored in your browser only with your consent. You also have the option to opt-out of these cookies. But opting out of some of these cookies may affect your browsing experience.
SAVE & ACCEPT